For some reason a lot of beginners think that learning to snowboard is easier than learning to ski and that they can teach themselves or have a friend give them some pointers. Many broken wrists and bruised bottoms have proved that this is not always the case.

In many ways, snowboarding is more alien than skiing. Your feet are fixed in place, you're standing sideways and your direction is controlled by moving your weight from your toes to your heels and using your body to drive you through this transition. Unless you are familiar with board sports like skating, surfing or wakeboarding the body position and stance will feel very unusual.

We would always recommend getting lessons. There are some great snowboard instructors in Avoriaz. After a few hours, an instructor can have you linking turns in a controlled manner and then you are free to explore Avoriaz on your own. It really is worth the money and you will enjoy your holiday far more than if your friend shouts “Turn, TURN!!” unhelpfully from the bottom of the piste.

To help you on your way here is a quick guide to setting the stance correctly on your snowboard, and a break down of what to expect from a snowboard lesson.

Setting up your snowboard stance

A strong snowboard stance is the foundation of good technique. When most people begin snowboarding, they use the stance that their local shop set up for them when they were buying or hiring.

So how important is it to set up a stance that is right for you? And how many different ways to bolt bindings to a snowboard are there? Well there are thousands of permutations for your bindings and the stance is the foundation of all technique, whether it’s for riding piste, park or powder, so it’s very important to get it set up just right for you. It only takes about 15 minutes to set up a strong stance but the benefits in both the ability to balance and have strong directional control of your snowboard are greatly increased.

To begin with you will probably keep your stance quite neutral with both feet evenly set up on the board, but as you start to turn your board and learn to control it your feet will move outwards so your toes are pointing towards the tip and tail. Ideally for everyday riding you will want to adopt a "duck foot" stance although it is probable that your front foot will have more angle on it than your back. Ultimately it is all about personal comfort but whatever you decide you shouldn't have more than 30 degrees of difference between your two feet.

How to set up your stance:

With this new strong stance you should feel a bigger platform between your feet, which will greatly increase your ability to maintain a balanced posture and at the same time give you the ability to generate strong pressures through the board to maximise your control.

It is very important to try to maintain a relaxed posture with the upper body and shoulders in line with your snowboard, even the slightest upper body rotation will result in a rotation of the hips which pulls the back knee inside the rear foot. With the knee in this position it now creates a block in the stance in which bending for balance is now very difficult.

With a strong stance set up and a good upper body posture (in line with the snowboard) you can now focus on developing good snowboard control technique using pressure through the outsides of the feet to turn the board. 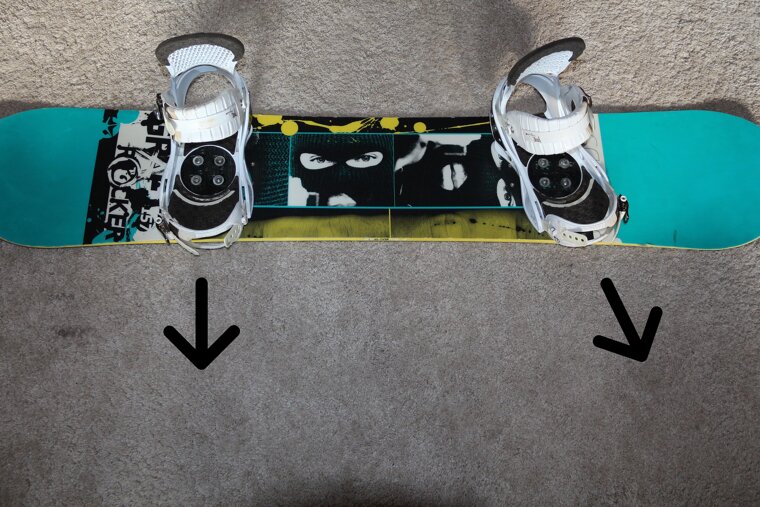 Begin on an almost flat section of piste. Standing with your board directly down the fall-line of the hill. With your instructor's boot keeping you steady get your body into position and let the board slide forward down the hill until it comes to a stop. This will help you find your balance and experience the sensation of moving on your snowboard.

With your snowboard across the fall line you should be able to stand up and remain in a stationary position by digging your edge into the side of the hill. If you are facing down the hill, on your heel edge, lift your toes up and bend your knees slightly to push your edge into the hill and find a balance point. On your toe edge, facing up the hill, put more weight on your toes and bend your knees again.

To release your edge and start sliding sideways down the hill simply stand up slightly and move the weight off your heel or toe edge. The board should start to slide down the hill and you can control your stop by once again flexing your knees and adding pressure to your edge. This will help you to understand edge control and control your speed. Next you will need to learn to control your direction.

Once you have mastered the control of your speed you will be able to advance your side slip to allow you to change direction. As you stand up and release your edge move your body weight so that it over your front foot and look forward over the nose of your board.

Your snowboard will slide down and across the hill, traversing the fall-line. To stop this return your weight so that it is even across both feet and bend your knees and pressure your edge into the hill just as you did in a side slip.

Once you have come to a stop stand up again and shift your weight backwards onto your back foot and turn your head to face your tail. In this way you should start to move back across the hill in the direction you have just come from.

If you repeat this process you can traverse back-and-forth across the slope like a “falling leaf”. You now have control of your speed and direction of travel and are ready to start learning to turn your snowboard.

Before you change from one edge to the other some instructors like to add this intermediate level.

J turns are easiest on your toe edge. Begin once again with a side slip and then shift your weight forward so that the snowboard begins to traverse the hill like in the falling leaf stage. If you then add more weight to your front foot and relax your edge grip completely by standing up almost straight, the board will move from its edge onto a flat base just like in the straight running stage. As you run on a flat base down the fall-line, you should have your weight neutrally balanced across both feet and be standing tall.

Finish the turn by shifting your weight back to your front foot, sinking down and allowing your edge to bite into the hill. To come to a stop sink back down low and bring your weight to a neutral position, evenly distributed across both feet. The try repeating the same process on your heel side. You should now be able to control your direction and speed across and down the fall line. 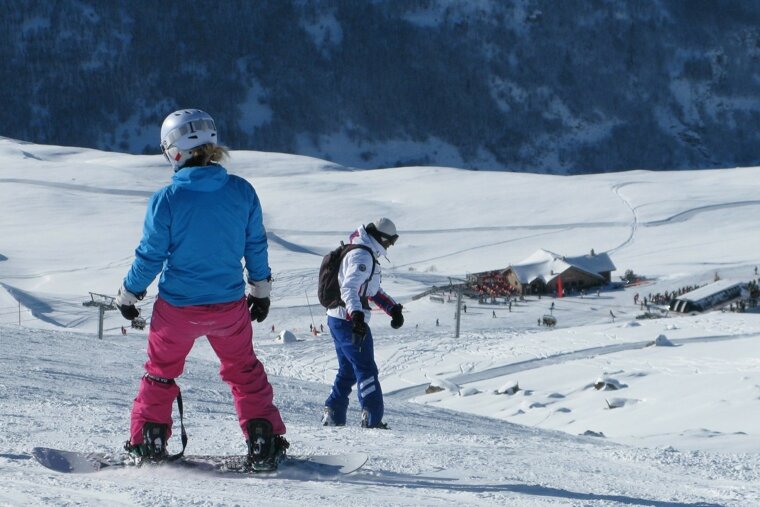 You are now ready to turn the snowboard down the fall-line from one edge to the other.

From your stationary position stand up slightly releasing your edge, shift your weight onto your front foot and allow the board to slide down the fall-line. Once the board is sliding straight down the hill and you are standing straight sink down by bending your knees and changing your weight onto your other edge. As the edge change is completed shift your weight from your front foot to your back foot to allow the edge to bite properly at the end of the turn.

You should have now completed a C-shaped arc and be stopped just below your start point on the opposite edge. Do this the other way and you are now snowboarding!

Find your way around with Piste Maps for Avoriaz.

Take a look at this year's Ski Lift Pass Prices and if you're not sure which one to buy, read our Guide for more information. You can also read more about Family Ski Holidays in Avoriaz. 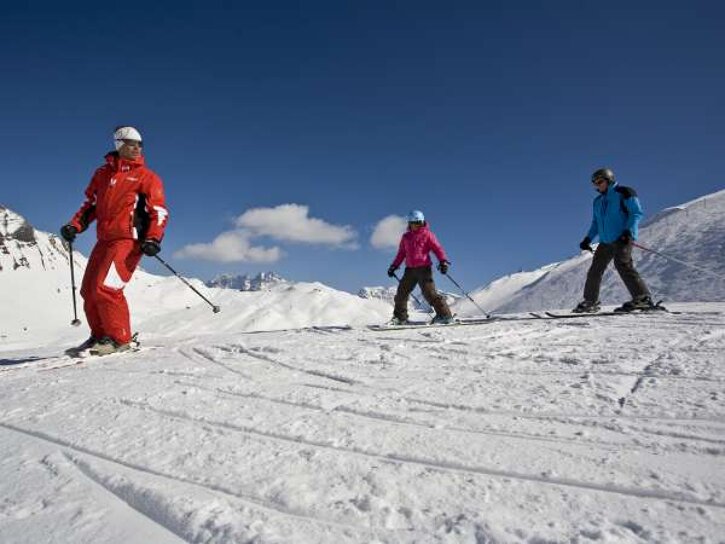 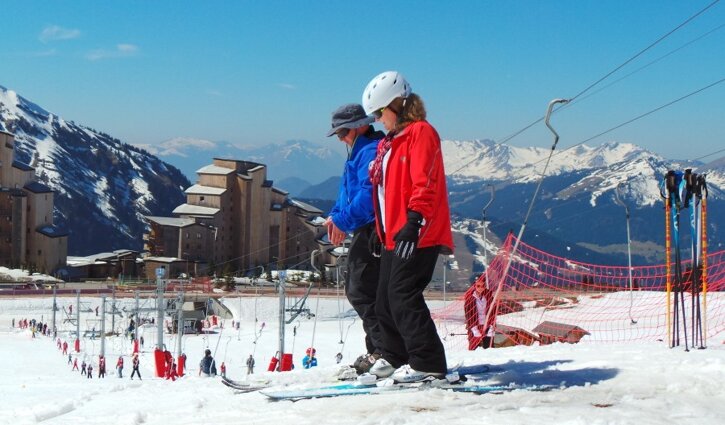 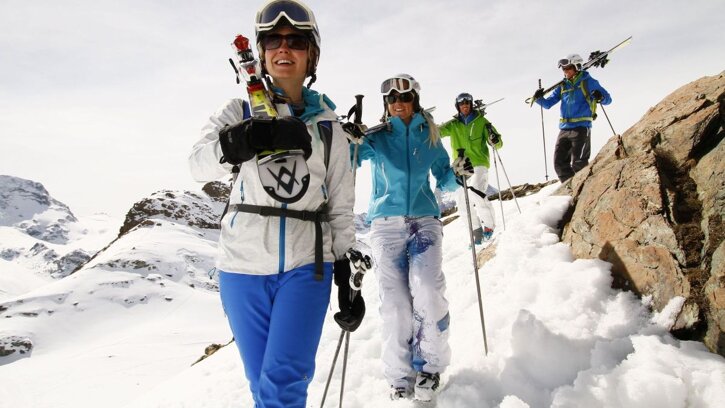