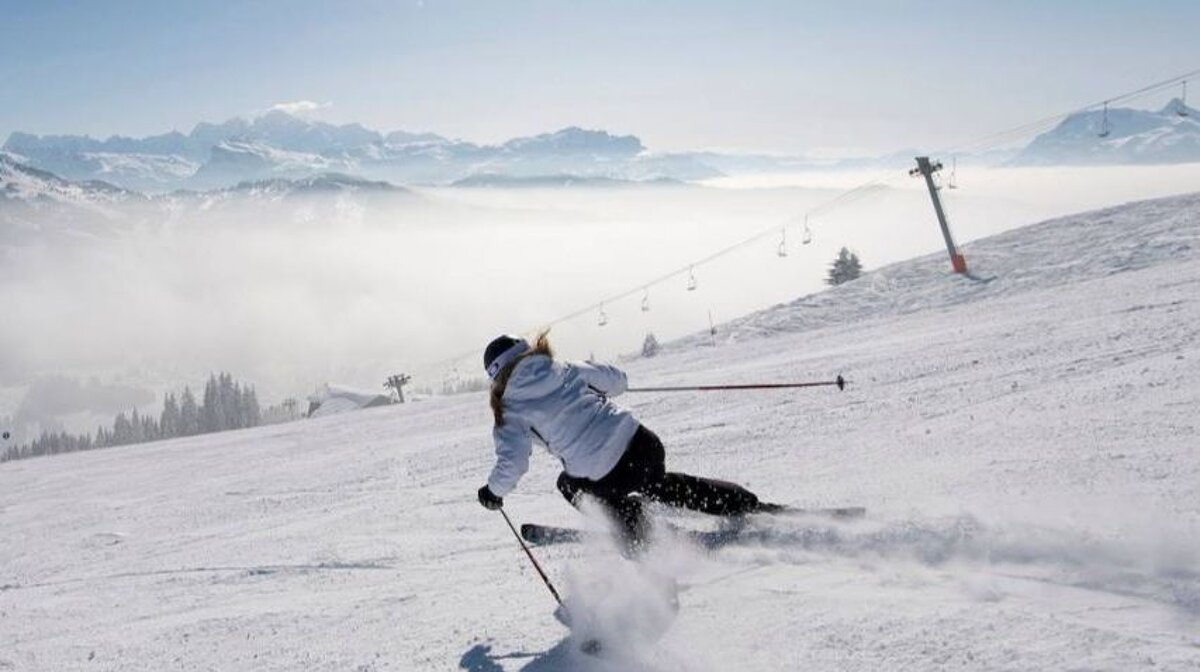 a skier carving in les gets

four children skiing in Les Gets

two skiers off piste in les gets

Les Gets is a very pretty ski area; tree-lined runs in the Ranfoilly bowl and stunning panoramic views from the top of Mont Chery make this one of the best areas for cruising pistes with a backdrop.

The area as a whole is very beginner friendly with a free beginners zone in the Chavannes and the higher, blue pistes here are wide and cruisey. There's some faster, carving pistes in Ranfolly and also great little powder spots that stay fresh on Mont Chery.

If you are coming to ski Les Gets from Morzine or Les Gets itself you will probably start off in Les Chavannes, either from above having skied down from Pleney or from the Chavannes lift in the centre of Les Gets town.

Les Gets’s immediate ski area offers two lifts, the Chavannes Express and the Telecabine des Chavannes. The latter services the beginner area above the Chavannes offering the wide but not so gentle gradient of Bruyere and the Gentiane.

Many more runs are available over in the Chavannes bowl serviced by five lifts; Nauchets Express, TS Mouille au Chat, Ranfoilly Express, TS Rosta and Grains d’Or Express. There are multiple blues, reds and blacks in the bowl offering something for every level of experience and ability. All the runs converge on the lifts at the centre of the bowl making this the perfect area to spend the day, or longer, with a mixed ability group.

Mont Chery sits opposite the Chavannes side of the resort and is served by the TC du Mont Chery. From the resulting Mont Blanc view point at the top of the telecabine two chair lifts offer access to the mainly red runs dropping down the face of Mont Chery; TS de la Pointe and TS Grande Ourse. A drag lift TK de Super Chery sees very little use and for those not averse to this mode of transport is a more than acceptable way to access the top of the mountain. This aspect of Mont Chery is south facing and does, later in the season, become slushy quicker than other aspects.

TS Grande Ourse leads to the Freestyle district, basically a well featured park area with a boarder cross course adjacent. The red Lievre run leads to the TS des Planeys, an old school slatted lift but well worth the visit. This aspect of the mountain is more in the shade and will maintain the snow condition on sunny days later in the season. The black piste Bouquetin is very demanding initially as you leave the top of the Grande Ourse lift, characterised by a steep drop in and big moguls. The run eases and then gives way to a narrower but steepening section merging with the bottom of the Lievre near the foot of the Planeys lift.

TS de la Pointe decants to the Mont Chery ridge line and offers access to two black mogul runs; Chevreuil and Mouflon, leading to the Encrenaz. Both runs are north facing and maintain there condition well free from the day long affects of the sunlight experience of the opposite side of Mont Chery. For the less experienced skier the Marmottes red is a wide but initially steep run (although this section can be avoided by a narrow run on a gentler gradient) giving way to a more civilized slope near the bottom merging with the blacks right at the foot of the TS Chery Nord.

Possibly two of the best runs are the retour options back into Les Gets from the top of the telecabine; black Gazelle and red Chamois. Both are a little more dependant on conditions than the runs higher up as they loose a little temperature as a function of altitude and require sufficient snow to cross the access road on a couple of occasions. They are however both excellent runs and usually available most of the season.

Beginner areas in Les Gets

Les Gets has the free “Mappy’s Areas” for beginners. This area is set aside specifically for beginners, regardless of age, and means large savings on lift tickets for first-time skiers. The area has two “magic carpets” and a rope tow for transporting skiers around their new playground but the best thing about the area is that it is a natural suntrap with a number of restaurants and bars nearby and it enjoys spectacular views of the surrounding peaks of Randfiolly and Mont Chery.

There’s also a fun, popular ski park for children in Les Gets. Le Grand Cry is adorned with totem poles and American Indian decoration. It’s a great place to go as a family; your children can try small tunnels and jumps and then get their faces painted in the main tepee. Don’t be surprised if you see lots of little skiers with feathered headdresses bombing around Les Gets.

Advanced areas in Les Gets

Les Gets or more precisely the Chavannes Bowl has two black runs, Yeti and Myrtilles, which nearly always sport some pretty severe moguls on steeper gradients. For something a little steadier to work on the technique try under the lift line of the Nauchets Express to the skiers’ right of Ambresalles.

Mont Chery above Les Gets also has a couple of steep long mogul runs down the back of the mountain to Encrenaz; Mouflon and Chevreuil.

Off-piste areas in Les Gets

Les Gets’ best area for off piste skiing is the Mont Chery side of the valley. Not only is it quiet and the back side is north facing but it also has one of the best views in the whole Portes du Soleil.

Head to the top of the mountain via the Telecabine Mont Chery and the Grande Ourse Chairlift. Then skirt round the back and drop down the side next to the Bouquetin Black run. There are some open pitches here and some sections through the trees. Pick up the old and rickety Planeys chairlift and do it again.

Alternatively, drop off the back and explore the section accessed by the Chery Nord Chairlift. Once you have ridden the powder you can enjoy a well-deserved lunch in the Excellent Grande Ourse Restaurant, but you will need to book as it is very popular.

Another good spot, but on the other side of the Valley is the Chavannes bowl sitting under the peaks of Le Ranfoilly and La Rosta. The five lifts servicing this area offers multiple off piste tracks between the abundance of red, blue and black runs in the bowl.

The off piste options are clear from the lift but the area is big and does take a little while to become fully tracked out. Once the more open spaces have been used up you’ll need to go exploring in the trees but don’t worry as there is little chance of getting too lost, all routes lead back to the lifts.

Descend off the Ranfolly peak drop into the small bowl to the skiers’ right before you get as far as joining the blue Gentiane piste. The bowl funnels tighter between the trees but offers multiple lines eventually depositing you on the Tetras red run and onward to the Choucas leading to the Grand Pre for a return to Morzine.

Snowparks in Les Gets

The Les Gets Snowpark is at the top of Mont Chery and has one of the best views in the whole Portes du Soleil. The park is accessed by the Grand Ourse Chairlift which almost never has a queue despite being old and a little slow. The kickers and rails here are usually suitable for beginner to intermediate riders and as it's a south facing slope it is best enjoyed in the colder months before it becomes too slushy in the spring. There is an airbag here too for practising any new tricks.

Bad Weather areas in Les Gets

A good area to ski in bad weather is the Chavannes bowl. This large ski area offers multiple lifts from the same point and multiple runs; blue, red, black and off piste, all converging on the same lift area. To reach the Chavannes bowl you’ll need to brave the long Chavannes Express lift but this is a much better option than the TC des Chavannes followed by the TS de la Croix which decants to the same place. The latter lift vies with the Belvedere at the Pleney for the slowest lift in the world and is not the place to be sitting in a snow storm. Upon emerging from the Chavannes Express take the Violettes blue all the way down to the centre of the lift system. This, like all the runs in the area offers lots of little cut throughs off to the sides of the piste near the trees to gain the contrast required in white out conditions. And failing that much adventure, the edges of the piste offer up multiple little kickers and drop offs to keep you entertained.

To really get up close and personal with the trees in the Chavannes bowl use the TS Rosta, Grains d’Or Express and the Ranfoilly Express to spy out the off piste cut throughs accessed directly from the end of the lifts or a little way down the pisted runs. For the less experienced the latter are all tree lined and are a good way of getting into un-groomed areas down the edge of the piste without getting too far afield or too tight into the trees where making that turn is compulsory, not optional. Your friends can get together at the lifts gathered at the bottom of the bowl, emanating like spokes from a wheel hub, making it difficult to permanently lose anyone from your party.

Another option for this ski area would be to drop down to the Perrieres Express on the Meleze red and explore the cut throughs and edges down to this relatively unused piste. Mostly people park at the bottom of the express lift for the day and do not ski the home run and its little off piste off shoots until it's time for home meaning if you're there earlier in the day there is a good chance you’ll have the place almost to yourself.